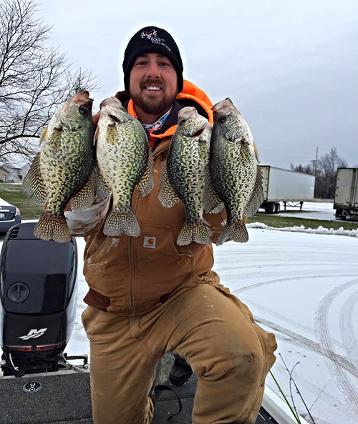 Dustin is an avid fisherman who has been fishing since he was able to hold a rod and reel. He is also an active Tournament angler in Illinois. Crappie fishing is a huge passion for him and when he isn't guiding or fishing tournaments, a lot of his free time is spent on the water. This allows him to consistently keep clients on fish year round.  He has a vast knowledge of lakes, fish patterns, techniques, and electronics. Dustin is very eager to pass his knowledge onto others who enjoy the sport of crappie fishing

In Terry’s words on fishing for Crappie on Clinton Lake…..

“Clinton has a great crappie population and has only continued to improve. I am fortunate enough to live close enough to Clinton where I can enjoy the crappie fishing year round. Some of my best and most fun guide trips come in December-February when others are at home waiting for warmer weather. On January 21st 2017 I had a father and a son in the boat and we had our triple limit by 11:30 am, using slip bobbers and fishing 3 to 4 ft deep. It’s a pretty common misconception that the fishing for crappie is only exceptional during the spring spawn and fall feeding frenzy. Those cold months and weather crappie fishing is some of the most exciting fishing that too many people miss out on.”